The 3 acrylic-on-canvas murals in the City Council chamber portray events that took place in the Saddleback Valley in 1769, during the 1790's, and in 1847.

Discovering Orange County
In 1769, Gaspar de Portola, a military officer and a Spanish aristocrat, was appointed to command an expedition traveling northward into the unmapped territory of Alta California. His assignment was to seek out the legendary Bay of Monterey and secure Spanish claim to this vast frontier. With a company that numbered 63 and included 26 soldiers, 15 Baja California Indians, 2 missionaries, and 7 muleteers to care for their 100 mules, Captains Gaspar de Portola and Fernando Rivera y Moncada 1st entered what is now Orange County, on July 26, 1769.

Mining Pecton Reef
Soon after Father Junipero Serra dedicated Mission San Juan Capistrano in 1776, Franciscan missionaries began converting local Acjachemen to Christianity and bringing them to the mission to learn the European way of life. These converts-or neophytes, as they were called-tilled the soil, tended the crops, and helped construct mission walls and buildings.

Lime
The mission population increased steadily, and by the 1790's, lime was constantly needed to make the plaster and mortar used to enlarge existing buildings and to construct new ones. One source of this mineral was the fossil limestone reefs of ancient seabeds. Native-American neophytes cut blocks of limestone from deposits like that found in Pecton Reef (an exposure of the middle to late Miocene Monterey Formation located in what became Laguna Hills) and took them to the mission to be heated in ovens until they were reduced to the valuable powder. 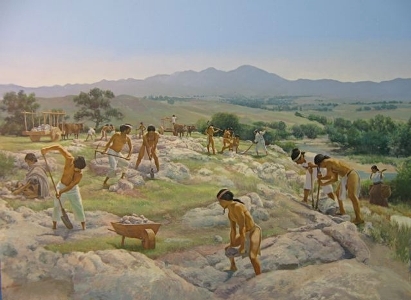 War Brings Change
During the Mexican-American War, a combined force of 600 American soldiers, sailors, and Marines under the joint command of Army General Stephen W. Kearly and U.S. Navy Commodore Robert F. Stockton made camp at Don Juan Avila's Rancho Niguel.  They were traveling north from San Diego to the Los Angeles area between December 29, 1846, and January 8, 1847. Their mission was to secure Southern California and then retake Los Angeles, which was held by Californios.

Journey
Some 4 weeks earlier, General Kearny and 139 mostly mule-mounted dragoons had endured a grueling 850-mile march from Santa Fe, New Mexico, to California. In the San Pasqual Valley, near San Diego, they had been besieged by Californio lancers for 4 days, until Commodore Stockton arrived with reinforcements. At Avila's hacienda on the south bank of Los Alisos Creek, just west of El Camino Real and within the borders of what later became Laguna Hills, the battle-weary Americans stopped to rest before continuing their trip north. 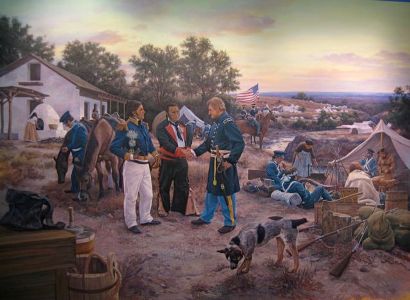 Don Juan Avila
Following their visit, Don Juan Avila went to Los Angeles to persuade his brothers to abandon the Mexican side. On January 9, 1847, he was present at the decisive Battle of La Mesa, where a victory by the Americans resulted in their reoccupation of Los Angeles and helped bring an end to the war in California 3 days later.