Paul & Claudia Riha, Mixed-Media Artisans
Paul and Claudia Riha created the vaquero on horseback amid cattle brands on the lobby wall and the interpretive signage in the lobby and City seal in the City Council chamber.

As a boy growing up in Madison, Wisconsin, Paul Riha loved art, nature, and woodworking. When Paul came to Southern California in the early 1970s, he worked for a time as a carpenter. Eventually, Paul and a partner specialized in building curved wooden staircases, and he settled in Carlsbad, California, with his wife Claudia, an elementary school secretary and artist.

Stone Imagery
When the housing market slowed, Paul took up digital graphic design, which he had studied at the University of California, San Diego, and at Palomar College; and in 1994, Paul and Claudia formed Stone Imagery. Their print media design clients included Oprah Winfrey’s Harpo Productions, Quaker Oats, Alberto Culver, and the Japanese Friendship Garden.

Meanwhile, Paul’s interest in art and nature led him to join the National Association for Interpretation. He believed that mixed media could be used effectively for donor recognition and interpretation. When Paul approached the Zoological Society of San Diego with this idea, he was asked to create donor recognition for the new panda exhibit. The project was a success, the business grew, and today Stone Imagery’s client list includes the United States Agency for International Development (USAID) Memorial at the Reagan Building in Washington, D.C., California State Parks, and the San Diego Zoo and Wild Animal Park.

Mixed Media
Employing the mixed media of engraved stone, high-pressure laminates, and metals, Stone Imagery, in Paul’s words, “brings an entertaining and artistic approach to development, recognition, and interpretation.”  He explains, “Most of our projects are collaborative experiences in which we learn from everyone we work with and share the spotlight with other members of a team.”

Working as a Team
Indeed, Paul and Claudia are a team. Paul coordinates their projects, they work together to create the designs, Paul selects materials and shapes the stone, and Claudia illustrates and does the engraving. When Stone Imagery met with Laguna Hills representatives to discuss creating a life-sized metal vaquero on horseback lassoing a wayward calf for the Civic Center lobby, it was Claudia who quickly captured the concept in sketches she produced on a paper napkin. 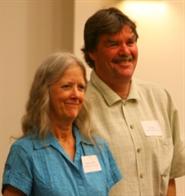 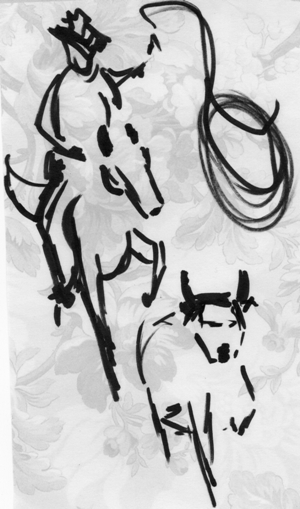